I am an atheist. I believe that no God or gods exist.

It would be wonderful if some of the gods described in human mythology and theology existed. It would be appalling if some others existed (e.g. the Old Testament god, or the Muslim god).

Sadly in some cases (and thankfully in others), there is no evidence for any of them. They are all just stories, inventions of our imagination. 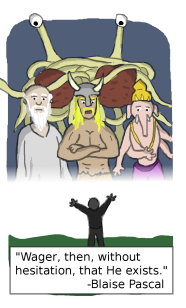 The problem with Pascal's Wager.
It applies to all gods. You have to believe in Allah and Baal and Ganesh too, in case they punish you.
See full size. From cectic.com. See terms of use.
Another cartoon here.


"Open-mindedness". From QualiaSoup.
Belief in religion and other non-scientific concepts does not necessarily make you more "open-minded". Often it means you are very closed-minded indeed.
This video is a brilliant short course in why people use logic and evidence, and how that is different from other ways of forming beliefs.
If you ever wondered why people don't think your God exists, watch this video.

The existence of God

The history of the world


Eddie Izzard comedy routine "Religion, Science, The Bible, And Dinosaur-Churches" sums it up:

Smart tweet about gay marriage, 4 Feb 2013.
But it can be applied more generally:
For somebody who loves humans so much, God really seemed focused on dinosaurs for 180 million years.

God's decision not to provide evidence

God's decision not to provide humans with evidence of his existence is bizarre and inexplicable.


"God Only SEEMS Nonexistent!"
A smart video on the eternal question - Why doesn't God just make his existence obvious?
From Edward Current. 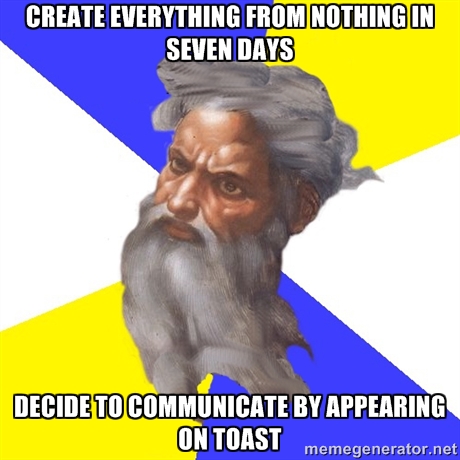 Seriously, God, why not talk to us. 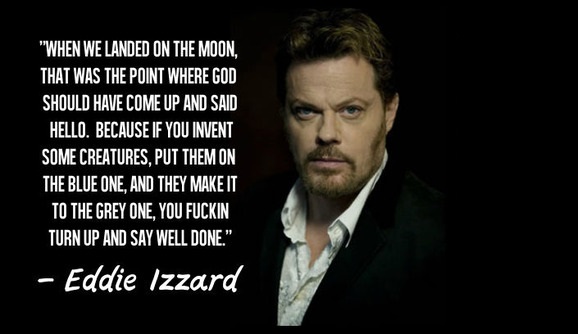 Great Eddie Izzard quote.
Come on God, talk to us. 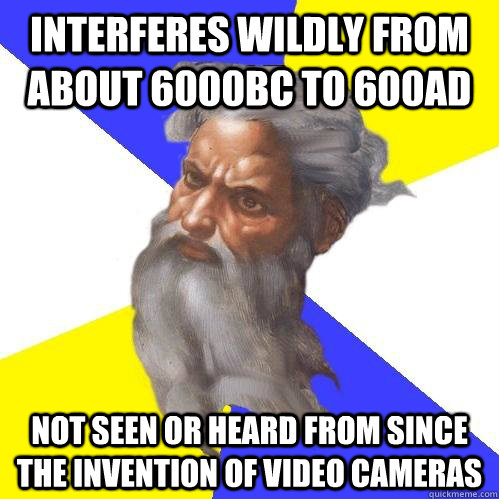 In particular, David Hume provides an answer to the "Lord, Liar, or Lunatic" argument (or "trilemma") centuries before the much lesser mind of C.S. Lewis. 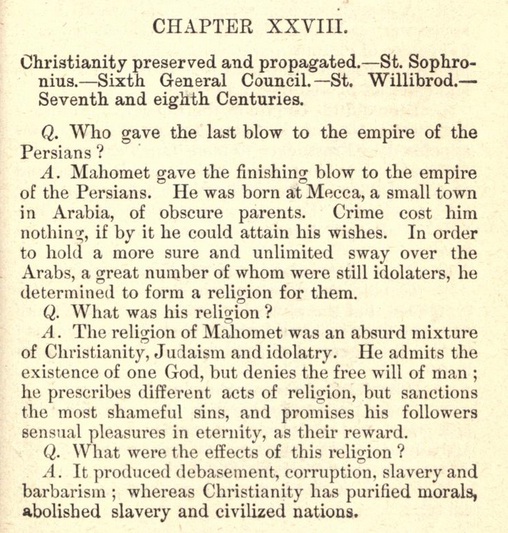 In fact, the religion of Islam shows that it is not very unlikely at all that false beliefs could spread rapidly across the world, and have people willing to die for them.
From the Catechism of perseverance (1850). 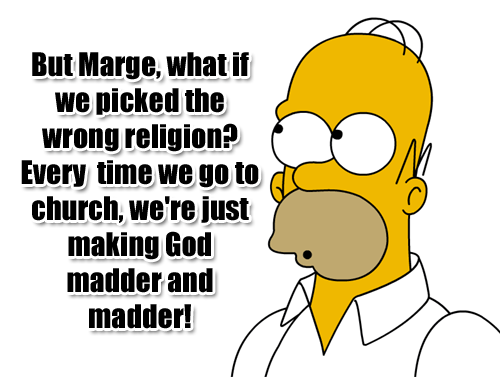 After 322 years, Homer Simpson demolishes Pascal's Wager in Homer the Heretic (1992).
Saying he no longer wants to go to church: "And what if we picked the wrong religion? Every week, we're just making God madder and madder."
Search for clips. You can buy it here. 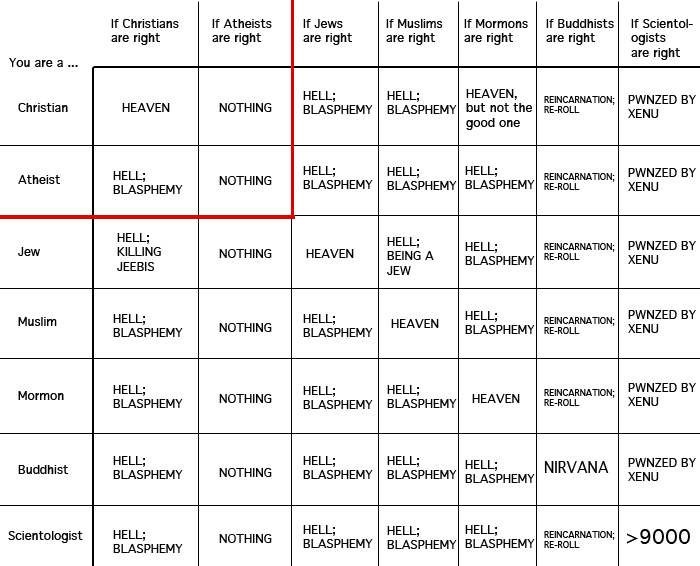 The problem with Pascal's Wager is that it only considers the section outlined in red.
Found here. 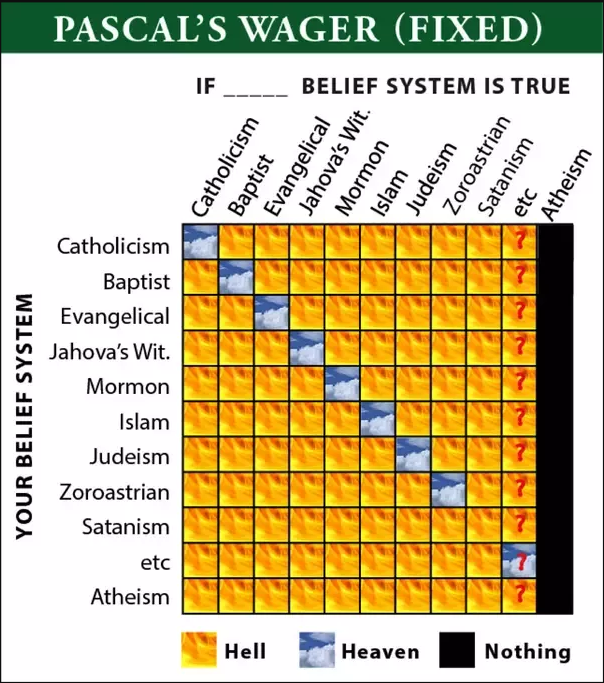 Belief is about lack of curiosity

The cruelty of God

God, if he exists, is clearly far more cruel and uncaring than a human would be in his position. Most normal people, it seems to me, are better (nicer, more caring) than God. Consider the following:


Sketch by Mr. Deity (Brian Keith Dalton) about all the evil God decided to allow.
God is far more cruel than a human would be in his position.

Stephen Fry on the cruelty of God.
See transcript: "Bone cancer in children? What's that about? How dare you. How dare you create a world in which there is such misery that is not our fault. ... the god who created this universe .. is quite clearly a maniac, utter maniac. ... Yes the world is very splendid but it also has in it insects whose whole life cycle is to burrow into the eyes of children and make them blind, they eat outwards from the eyes. Why, why did you do that to us? You could easily have made a creation in which that didn't exist. It is simply not acceptable. So you know atheism is not just about not believing there is a god, but on the assumption that there is one, what kind of god is it? It's perfectly apparent that he is monstrous, utterly monstrous, and deserves no respect whatsoever." 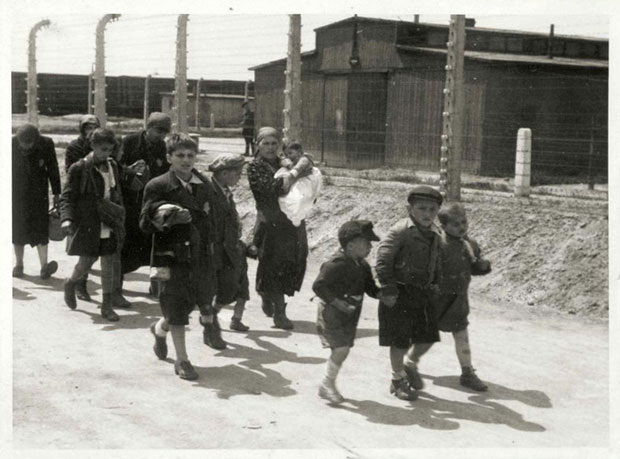 Children being taken to be killed by the Germans at Auschwitz, 1944.
God never tries to stop such things. Only humans try.
From here in The Auschwitz Album.

The end scene of Granpa (and here and here).
Granpa dies, and God won't let us ever talk to him again.
From Dailymotion.

Praying to God for things

This rather brutally sums up the problem.
Found here. 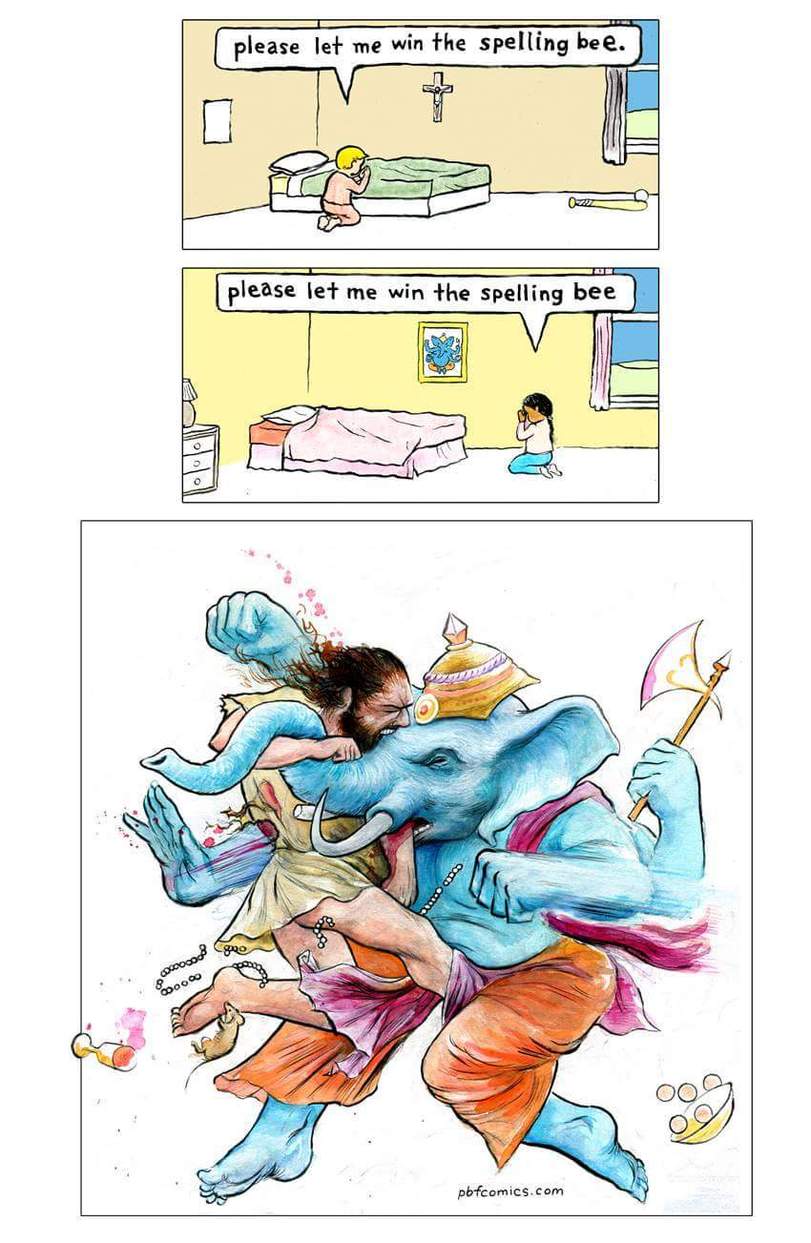 Brilliant commentary on praying for things.
From pbfcomics.com.

David Quinn is on the right in Ireland, and like many other people I read on the right, I agree with much of what he says on politics, but disagree with his (traditional Christian) ideas on religion.

With the atheist Richard Dawkins I have a similar situation - I agree with him on religion but disagree with his (traditional left-wing) politics. So it is interesting to hear a debate between David Quinn and Richard Dawkins, on RTE Radio One, The Tubridy Show, 9 Oct 2006, especially given that religious people think he destroyed Dawkins.

I think Quinn is largely wrong, but Dawkins doesn't do a good job of asking him hard questions.

If there is no God and no afterlife, is life meaningless?

If your life ends at death, and even humanity itself might go extinct one day, does that make life meaningless and pointless?

Here's a few things to consider: 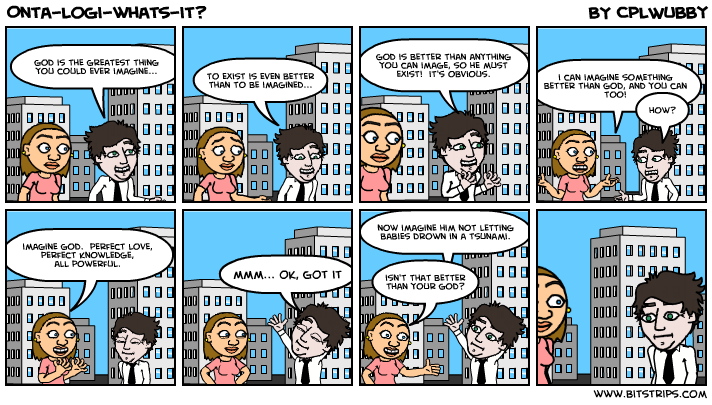 We can always imagine something better.
Strip from here.
See all strips by user cplwubby.

"What you get with a basic life".
Comedian Louis C.K. points out how great it is to be alive.

The poem "Japanese Maple" by Clive James.
Written in 2014 after he was diagnosed with terminal illness. He died in 2019.

"Reality was before you. Reality will be after you. Reality is all you'll ever have. Enjoy your moment in this green & blue sun-warmed place."
- Richard Dawkins, 10 June 2014.

"I am proud to be a human being. I believe that we have come this far by the skin of our teeth - that we always make it just for the skin of our teeth - but that we will always make it, survive, endure. I believe that this hairless embryo with the aching oversized braincase and the opposable thumb - this animal barely up from the apes - will endure, will endure longer than his home planet, will spread out to the other planets - to the stars and beyond - carrying with him his honesty, his insatiable curiosity, his unlimited courage, and his noble essential decency. This I believe with all my heart."
- Robert A. Heinlein, "Our Noble, Essential Decency", 1950s.